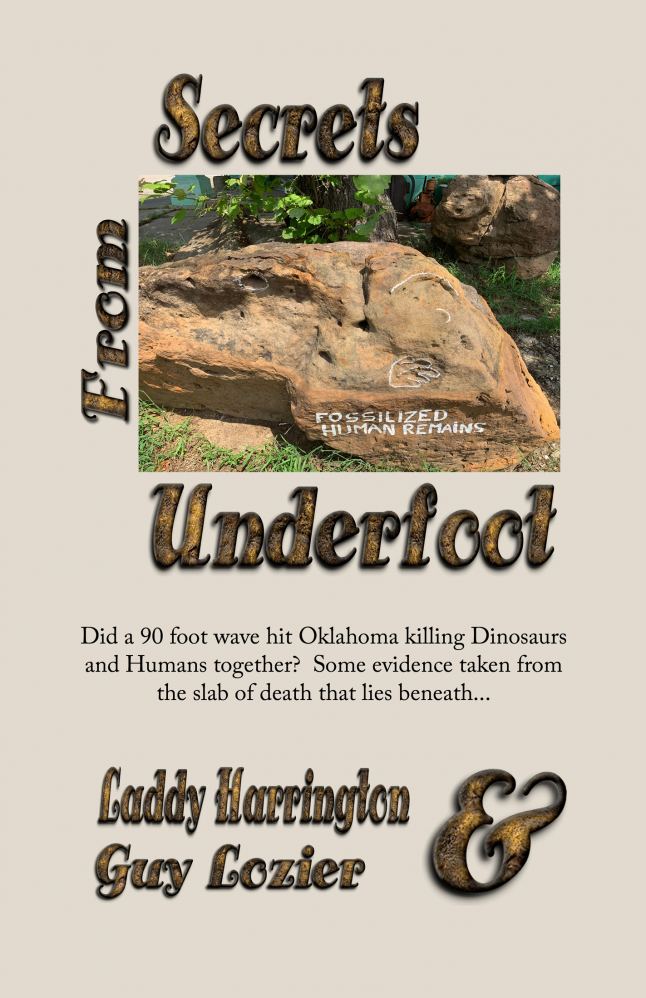 We asked Author Guy Lozier to share with us his reason for working with the Director of Shamrock Museum Laddy Harrington to write a book. This is his response.

“The evidence is overwhelming. It shows massive mud slops that hold imprints of carcasses of humans and dinosaurs from the same incident. Accordingly, as he brought in the scientists to review his evidence, they responded positively. Nearly all agreed with his assessments of the evidence. Several indicated that they had been looking for this type of evidence their whole lives.

The problems became apparent when the age of the evidence was reviewed. The main issue being that humans were not supposed to have existed during the times the evidence seemed to show. This caused the scientists major problems. They could not show this evidence nor support it as it would cause them to tarnish their reputations, not to mention the possible loss of their jobs.

After reviewing his findings, I decided to help. We will continue to work on releasing the evidence to share with everyone the amazing stories of events that played out right here in Oklahoma.”

Next we spoke with the Shamrock Museum Director Laddy Harrington to find out why he sought out Author Guy Lozier for help to write this book. Here is his reply.

“There is a well-kept secret underfoot. It is in and on the sandstone that is found dotting the landscape on the southward edge of Creek County in Oklahoma. The rock has been exposed by erosion and oil field operations.

The rock contains the evidence of a global disaster that wiped out much of the living animals including many humans. It happened at a time when humans and dinosaurs lived together. The way I know this is by examining the evidence which is scattered all around me here at Shamrock Oklahoma. The reason I went to Guy was because the mainstream academia refused to share this knowledge but instead keep it hidden away from prying eyes. They acknowledged that the evidence is real but they say that its age of at least 299,000,000 years makes it controversial and therefore they refuse to discuss it with anyone.”

You can find the book in Hardback, Paperback, and Ebooks at Amazon.com and many other outlets across the globe.

Guy is currently giving away over a thousand free audio books. You can find more information on that at his internet site.