First released as papers for a workshop at an ashram in Australia, now released as a book for public consumption.
By: Infinite Offspring Films 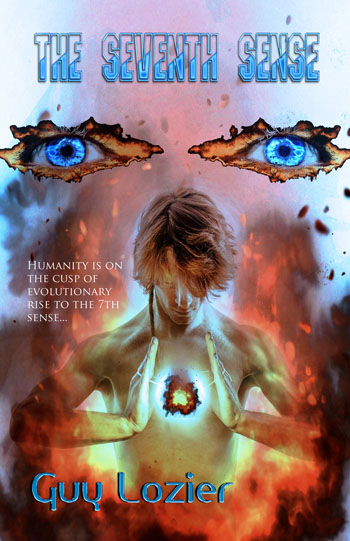 TULSA, Okla. – July 7, 2019 – PRLog — The Seventh Sense Book is said to be one of the most powerful books on the planet today. Covering ancient secret knowledge which has been hidden from humans since the beginning of time.

Guy Lozier openly shares the information for everyone to read. We asked him to elaborate on the book and give us some insight into what it is about. Here is his reply.

“The potential of humans is off the charts. It’s only that humans have been side tracked by religions and other information which causes them to ignore the truth about us. Fact is, the most ancient writings on the planet infer that this was not by accident but rather a manipulation by outsiders or as we tend to refer to them as Aliens. Yet the greatest understanding from those same writings and other new discoveries spread across the planet, is that nothing is as it appears and we have a very ancient history with those aliens.

A simple fact of understanding would point to nearly every single individual on the planet today would be considered a hybrid alien with multiple lines of diverse aliens mixed in. New sites in different countries which those governments have attempted to cover up and actually lied to the public about, indicates that writings and other artifacts and information from those diverse sites explains that exact same thing as the most ancient writings. Fact is, those ancient writings which predate all religious writings on the planet show that the current religious texts we call Bibles and other writings have been taken from those ancient writings of which instead of what you see currently the original writings named aliens as gods. Now the same texts have been edited and the alien’s names removed and one god’s name placed. This has been shown as manipulation by those same aliens for a special agenda of modern times. An agenda that won’t transpire now.

So begs the question. Do we hide from the truth or do we face truths no matter where they lead? I have always tended to face truths instead of turning away. The ancient writings tell us that built into us is a system that causes us to conflict with each other in duality issues. A type of programming has been used against us. This same programming can turn us away from looking at truths. Yet there are methods and tools which allow us to decouple from the programming. What we call the Programmed Lives.

In between lives we are deceived and tricked into living a programmed life of duality instead of finding our potential. New discoveries of experiments have uncovered these facts. No longer do we have to live these programmed lives. No longer do we have to live in duality and harm or destroy each other. Infighting and arguing, rape, pillage, greed, war, secrecy, destruction, and all the horrid lanes of duality. All our systems designed for duality. Their lap dogs placed as rulers to help them control us. Some of their kind appearing to leaders of our organizations as angels, telling them to commit all kinds of atrocities in the name of God so that his will can be done. What they don’t understand is that the God they are following is but an alien who poses as a God. Aliens that pose as Angels to trick and deceive us into more duality.

Every system in the world is designed in duality. They fear our unifying to find our potential. They think that we can never accomplish what is needed to find our way out of their system. They think we are trapped in their created reality forever. They believe they will suppress us and oppress us into utter slavery in the end to a system of Eugenics where the governments control the level of implants for each one. The controllers and their police forces and armies will have the top of the line implants and genetic manipulations while the slave classes will only get the lessor versions which keeps the majority of the populace well under their control. That is their plan for our future. That is their path for us to take. But guess what? That plan has fallen apart. That plan will not work now. Those from outside the system have come into the system and are here helping us to experience our potential so that we will develop the Seventh Sense and decouple from the programmed lives.

Yet even with that, the newest scientific experiments have pin pointed more of our potential on how our very own consciousness is participating in the very creation of our reality. Our Holigraphic Reality, to be more precise. One experiment shows that our reality, while appearing as a 3D construct, is closer to a 2D experience which only appears to be a 3D environment. Another experiment shows how aspects of our consciousness creates the very reality around us and we are not aware that we are doing it. Physicist at M.I.T., Harvard, and other institutions are beginning to explain in interviews on TV that our reality may not be what we think but that it appears to be a type of computer simulated reality. That when they review our reality under a microscope and other uses of higher technologies, that it is closer to a computer simulated reality than anything else.

There are many experiments which show our potential than even those yet those that want to control us try to keep us from hearing about it.

So to help get past the programmed aspect which tries to keep us from experiencing our potential in the least, we are presenting tools which assist the individual to become self empowered and begin to experience for themselves.

The catalyst of these actions finds the individual having unified their consciousness which triggers built in aspects of our potential as the infinite offspring. In the head area particularly, are three organs that will unify to create a Toroidal Field in the head area which allows the genetics to raise their little antennae which opens a communication line outside of this reality and our true self, a hub of consciousness outside of this reality, sends a toned down version of higher self to sit within that Toroidal Field for us to experience an identity shift with. This is when we bypass the implants which are meant to keep us from experiencing our real potential and keep us locked in duality.

For instance, in chapter we cover a method on how to use a special tool placed here for our use by the Infinite Being, our parent, to remove fear and help us co-create the future as it approaches using our preferences.

It is important that the hidden and secret knowledge continue to be shown. Much of it comes from experience of the extra ordinary but also much comes from projects of higher beings that are here assisting us to break out of the oppression that is taking place by those that have been manipulating us. While that has mostly been what we generally call aliens in the ancient past, it has become our own kind, especially in modern times, that seeks to keep us from knowing what is truly ongoing here in our reality.

This information is designed to empower the individual to begin experiencing for themselves so they do not have to rely on others to find the truth about our prison. The prison, which I call the recycle program, and is very oppressive. But that is the problem, no system is allowed to continue to oppress others after a certain point. So we have a lot of assistance here now working behind the scenes to free us from the oppression.

Later in this century, all the projects which are underway will come to fruition and we will evolve with the majority of the population developing the Seventh Sense and living a life of pleasure without the oppression of today.

Live in the Light…”