Oklahoma is the location for the move production of The Seventh Sense. Starring Steve Crawford, one of Oklahoma’s most famous magicians, hypnotists, and actors. Featuring Producer Damon Blalack, Directors Guy Lozier & M. Elizabeth Dickerson, DC Media Productions with  Producer and actress DaVena Sulevan, the star of the Jezebeth 2018 TV Series & Producer and actor Charles Walker known for the role of Jonah Wyck in Jezebeth 2018 TV Series with DC Media Productions join our team on the Movie ‘The Seventh Sense’, Also we have Producer Mike Puskas joining us from Australia to handle the music production for the movie with his record label Ikonic Artists. 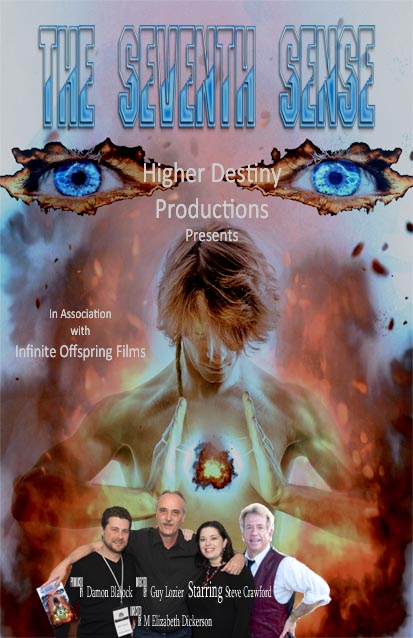 We asked Guy to share his thoughts on the upcoming project that is to be filmed at the Heartland Hypnosis Services Center in Shawnee.  This was his response.

“First, I want to thank Steve Crawford for agreeing to take our lead role in this film.  Second, I desire to show Johnie Fredman my gratitude for allowing use of his facilities in Shawnee to shoot our project.  Without those two guys our project would not have the tools it needs to progress.  Next I want to thank M. Elizabeth Dickerson for taking on the role of Director to help me find the best path forward with our project.  Also, the Executive Director of The Red Dirt Film Festival Damon Blalack is stepping up to the plate in our production to help make it all happen.  Thanks everyone for your support.

We have had this film in preparation for production for a little over a year as we continued to develop our production team and sign up our star and hypnotist Steve Crawford.  With the assistance of Johnie Fredman of Heartland Hypnosis Services Center in Shawnee, we will begin shooting in September of 2018.

We will be exploring many topics in the paranormal: including esp, clairvoyance, bi-location viewing, future time immersion, past time immersion, past lives immersion, in between lives immersion, genetic consciousness immersion, reprogramming within the genetic mind, unconsciousness, super consciousness, focused consciousness combined with personality evaluation, as well as many other topics such as healing modalities under hypnosis.We will be utilizing new techniques discovered in recent decades which appears to have opened new doors of discovery of the human capabilities and capacities.  Not to mention the hidden knowledge and secret knowledge which has been kept away from humans to keep us from knowing our potential.  To keep humans programmed in limited slavery to systems of control and manipulations from outside…

We hope to explore these topics to find which ones are relevant and real using these new scientific techniques.  With our professional hypnotist Steve Crawford we will delve into these questions with volunteer’s.  Our own production staff; including Damon Blalack, me (Guy Lozier), and M. Elizabeth Dickerson, along with others, will put their selves on the line in pursuit of this knowledge.  While these topics are so far out in what is termed left field, we have to remember that new discoveries in Physics in very recent years has determined that human’s consciousness is creating their very own reality around them and they are not even aware they are doing it.

Other new discoveries in the sciences show that our own reality is nothing as we believe it to be but closer to being an actual holographic set of energy fields that we are manipulating and creating with our unconsciousness.”

Watch for more interviews from the film production and actors of The Seventh Sense in the future.